Uninterruptible Power Supplies have been an important element in critical power protection schemes. Over time many different system configurations have been developed to mitigate the risk of loss of utility power. The following is a presentation of four typical UPS configurations used in industrial and commercial applications and an evaluation of each of their capabilities.

1. Reliability – Evaluates a configuration’s capability to maintain conditioned power to the load .
2. Complexity – Looks at the complexity of the configuration and the potential for single point failures.
3. Maintainability – The system configuration must allow for concurrent maintenance of all power system components – supporting the load with part of the UPS system while other parts are being serviced.
4. Functionality – The system configuration must be able to protect the critical load from a full range of power disturbances without transferring the critical load to external power sources, i.e. batteries or alternate power sources.

The standalone configuration (Figure 1), is the most common configuration utilized in UPS applications because it contains fewest number of major components. This system utilizes AC power (typically utility power) and converts it to DC through the rectifier. The regulated DC power is supplied to both bank of
batteries and to the inverter.

The inverter “inverts” the DC back into regulated, noise-free AC power and passes it along to the static switch. The static switch, under normal conditions, passes this AC power to the load. If a failure in the inverter should occur, or a fault on the load should occur which overloads the inverter beyond its maximum capacity, the static switch will automatically transfer to the alternate (or bypass) position and feed the critical load from the alternate power source through the static bypass switch. The manual bypass switch is a mechanical, make-before-break switch is used to bypass the UPS for maintenance purposes. When the AC power to the rectifier is lost, the batteries automatically begin supplying the required DC power to the inverter since there is no switching involved at this point. 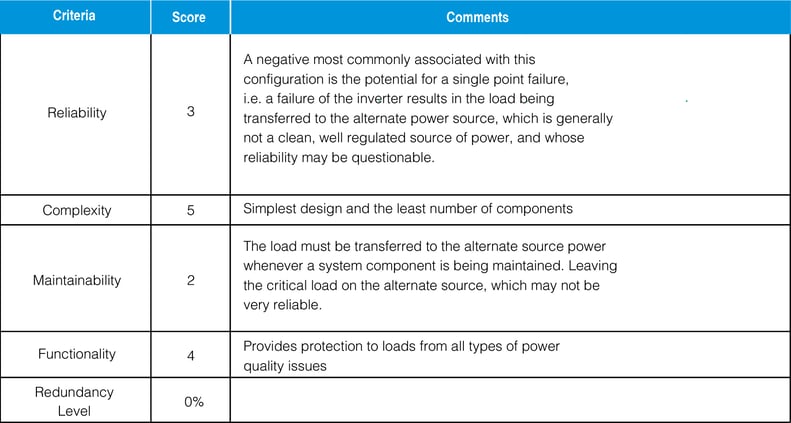 If UPS #1 should fail, or if the load current exceeds the UPS’s full load rating, the static switch will transfer the critical load to the static bypass (which is the output of UPS #2) within 4-5 milliseconds. When the UPS #1 is rectified, the loads will be transferred back to UPS#1 automatically without any interruption to the loads.

Under normal conditions, UPS #2 is idle but always on and ready to assume the critical load through the transfer of static switch (UPS #1). If UPS #2 should fail, its static switch will sense the loss of function and transfer the load to the system bypass source. The system bypass can be supplied through either a voltage conditioning (regulating) transformer or a non-regulating shielded isolation transformer a through a SCVS 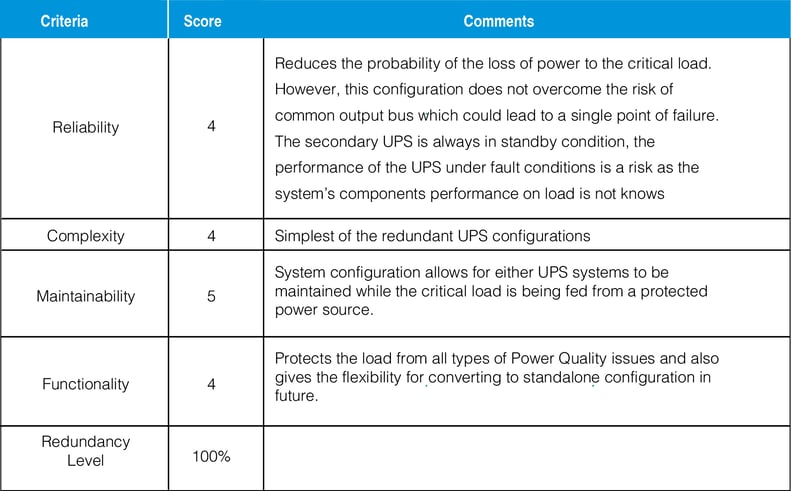 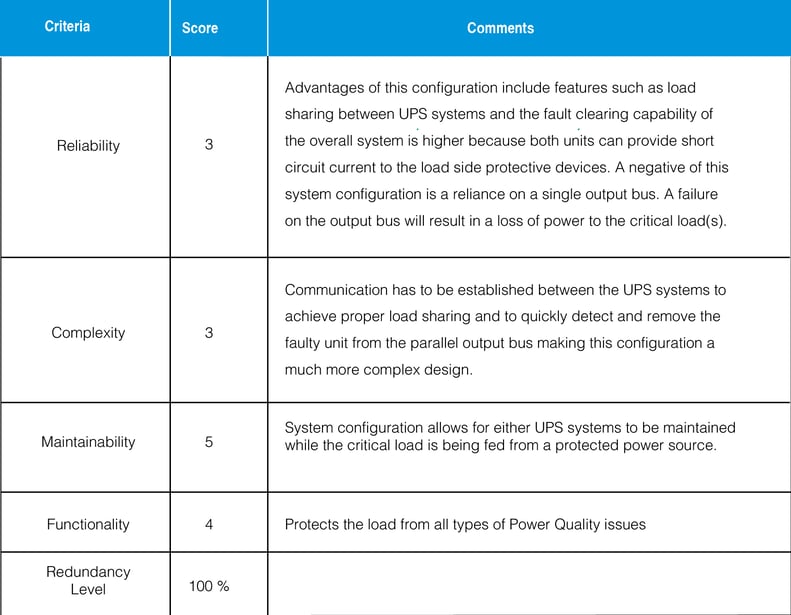 Parallel redundancy refers to the simultaneous operation of more than two UPS systems operating in parallel. Figure 4 – Parallel Redundant Configuration, illustrates three UPS systems operating in parallel. In this scheme each of the UPS systems will share equally the combined AC load. The failure of any one of the UPS system would result in the entire load being assumed by the remaining healthy UPS. The failure of two UPS systems would result in the load being transferred to the alternate power source via the static transfer switch.

The distributed redundant configuration, Figure 5, utilizes standalone configured UPS systems in conjunction with two stand-alone Static transfer switches. In normal operation, both units are designed to carry 50% of the critical load, and have 50% reserve capability to support the load on the other bus in the event the UPS feeding the other load bus encounters an operational problem. This allows complete independence and total isolation of the two UPS units from each other, facilitates separate output load buses, and eliminates the possibilities of single point failures either due to faults on the load side or because of faults within the two units. The result is a configuration that allows both critical load buses to be automatically fed from either the dedicated bus unit or the redundant unit. 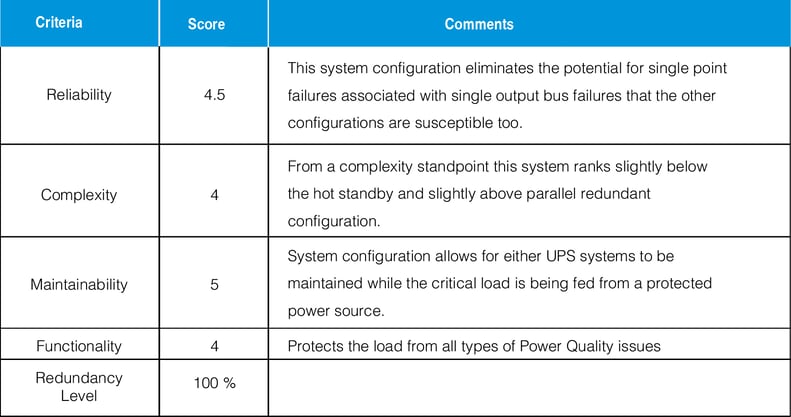 The dual bus configuration, Figure 6 utilizes two or more UPS systems operating in parallel with two independent distribution systems. This is the most reliable, and most expensive design in the industry 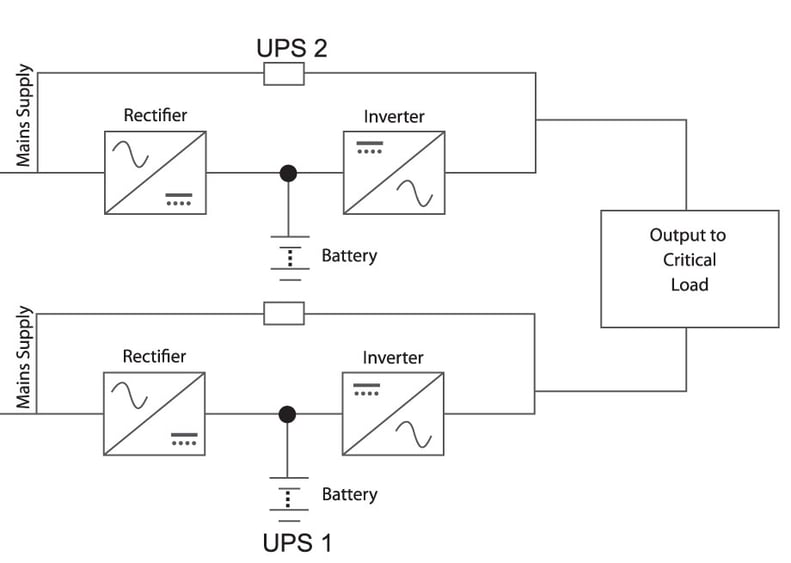