The government has also setup various Solar Parks across the country to promote Solar Power Generation in Utility Scale.

In parallel, to reduce the need to put up new power plants, the government has set an ambitious target to achieve 40GW of Rooftop Solar by 2022. Here the idea is that commercial, industrial, institutional and residential customers can use their available rooftop space to generate solar power for their own consumption and also to export any excess power to the grid which are facilitated by the net metering policies now announced in many states across India.

In Rooftop Solar, the primary objective is for the consumer to generate solar power for self consumption. But some of the limitations of solar power generation must be understood.

• Solar Power generation depends on solar insulation in the area where the plant is installed and it varies during the days in the year.

• In many parts of India, power generation starts from 6am (sun rise) and continues till around 6:30pm (Sunset) but generation picks up between 8am to 5pm and is maximum from 11am – 3pm. But even during the peak sun hours around noon, presence of moving clouds can cause sudden variations in power generation. This is highlighted by the power generation of a 85KWp Rooftop plant (Figure 1) on a June day in Hyderabad (Figure 2).

• The total energy generated in a day on average in India can be between 3.5 to 4.5 units/day/KWp but can also be lower on cloudy and rainy days and be as low as 1-2 units/day/KWp and as high as 5.5 units/day/KWp on sunny days with clear skies.

• The daily variation of energy generated by the same 85kWp rooftop solar plant is from 100 to 450 units / day during the month of June, but on average was around 4 units / day / KWP (Figure 3).

This variation of power generation is not only, during the day (sunrise – sunset), but also from day to day of a rooftop solar power generation plant means that it cannot be the sole source of power for any customer and can only augment grid power to reduce power consumption from the grid. 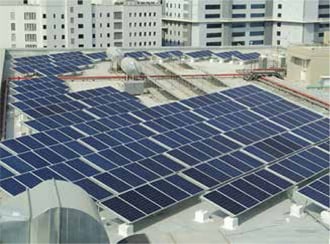 Figure 2: One day power generation by an 85kW Rooftop Solar power plant in Hyderabad during the month of June. 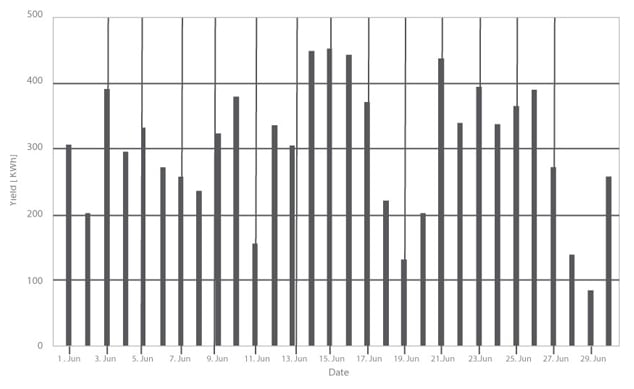 Figure 3: Daily Energy generation (kWh) by a 85kW Rooftop Solar power plant in Hyderabad during the month of June

The sizing of the rooftop solar power plant compared to the load pattern during daytime will determine if export of power to the grid is likely to occur.

Now if the same rooftop solar power plant was in a site where the actual power consumption of site is represented by Case 2. Here whenever solar generation is greater than power consumption, the excess power will be exported to the grid.

GRID EXPORT OF SOLAR POWER Here the customer can benefit from supplying excess power to grid only if Net Metering / Export Metering is allowed by the state electricity company to which the consumer is connected.

The future of net metering in India and around the world is under debate today.

The Net Metering policies today require utilities to purchase extra energy generated by residential, institutional and commercial rooftop solar installations above and beyond what is used on their premises at the retail power rate. This is often twice the wholesale generation price. The reason for the disparity is that the retail rate of electricity includes transmission, delivery and grid maintenance costs. Solar customers who depend on the grid to obtain power at night and sell their excess generation during the day to avoid these costs. In doing so, they shift the costs of supporting the grid to other customers who must then effectively pay more or the financial losses of the DISCOMs will further increase.

Today, many of the DISCOMs are already under severe financial stress. Further solar power generation being highly variable does not support the peak power demand, which happens during 6 to 10 pm every night. Also, export of solar power into an aging Transmission & Distribution (T&D) network might cause other voltage stability related problems and failures.

In light of the above facts, in Europe and in US, the electricity rates for grid export are being reduced much below the retail electricity rates to encourage rooftop solar power producers to increase their self consumption. This same trend has to play out in India very soon, where policies need to be modified to encourage self consumption and restrict the amount of power that can be exported to the grid. This will ensure rooftop solar does not become another source of burden on already financially-strapped state DISCOMs.

Having said that, for net metering and export of power to the grid, the solar inverter plays a very crucial role in optimizing the usage of solar generated power. This becomes a big challenge in India for grid-tie inverters, especially during grid failures. Most of the rooftop owners or EPC vendors just install the solar inverters without understanding the effect of anti islanding property of the grid connected plant. Ideally in a Grid tie solar PV system, no energy is wasted i.e. the last bit of excess electricity generated is exported within the premises or to the electrical grid. This power is then consumed by captive load within the owners premises or exported back to grid line, when there is absence of load and solar is still generating. But this is possible only if the grid is stable. When there is a grid failure, solar inverter stops generating power unless a Diesel Generator is used during a power cut/grid failure.

As we are aware in most of the cities in India, power cuts are very common especially during peak summer season. It is quite natural that under such circumstances, a solar rooftop owner will try to consume all the power generated through solar and reduce his dependence on diesel as fuel used in DG. However, the problem begins when the grid tie inverter fails to start without the reference voltage and frequency parameters that are non-existent during power cuts. As a result, the rooftop owner cannot use the solar power generated. This is disappointing because, they consider solar as a backup for power cuts and for payback through sale of excess power generated.

The grid inverters are usually connected to a common distribution bus bar with all sources synchronized such as grid, and diesel generators, along with the load on a common bus bar. What usually happens during power failure is, the grid inverters trips sensing loss of reference parameters and stops generation, now the DG senses this situation and switches ON to support the load manually/automatically with help of AMF panels. Once the generator switches on, this creates a reference voltage and frequency on the common bus bar and this starts up the solar grid inverters once the inverter is ON, the load will be supplied by both Grid tied inverter and DG sets (at low RPM) under the following conditions :

This limitation of the grid tie solar inverter can be managed with complex load management/control system with sensors and relay to protect the diesel generators from back feeding / reverse currents and giving feedback to solar inverter to produce less or using a dump load to remove the surplus power generated. So, to run the DG just for reference voltage and current during grid failure is not economical and overall defeats the very purpose of Solar Power plant.

In locations where power cuts are frequent and quality of grid power is poor, the best suited option is to use an Off Grid Solar power plant with battery backup. Here the solar power generated is used to supply a dedicated load and also to charge the battery. In the event there is no sun and no grid power, the power is supplied from energy stored in the battery. A challenge with this system is higher initial investment due to the cost of the battery. Further, solar power maximization is not possible for the installed capacity of panels when there is no load or if the load is low compared to solar generation. This situation will arise especially when the Rooftop plant is installed in premises, which is closed during Weekend and Holidays.

The only existing solution in the market today is Hybrid Solar Inverters (Figure 4) which marries the benefit of Off grid and Grid tied systems intelligently. The battery banks can be optimally designed (reducing up-front CapEx investment) to give backup only to the selected dedicated load. At the same time, the excess power generated can be supplied to other internal loads or to the Discom through net metering facility. Hence further earning/saving in the whole process gives a considerable payback or ROI, making it a financially viable option.

A 25kW Hybrid Solar rooftop power plant installed at an industrial customer site in Chennai (Figure 5) and was designed to support a dedicated load requiring about 60-70 units per day. Here the battery was optimally sized to provide back-up support for 3-4 hours when both solar and grid power were not available. Over the last 7 months since installation, the performance of this power plant is shown in Table 1. Here uninterrupted power was provided to this facility without the need for Genset or UPS/Inverter. Further all excess solar power generated was exported in-house and consumed by other loads (office and other load in the manufacturing facility) within the same campus. Here the customer got the benefit of uninterrupted power for the critical manufacturing load and avoided use of Genset while maximizing the power extraction from Solar power plant. In an OFF GRID solar power plant, in the same application, almost 50% of power generated from Solar would not have been usable which in the case of the Hybrid plant was exported thus maximizing the extraction of usable solar power. 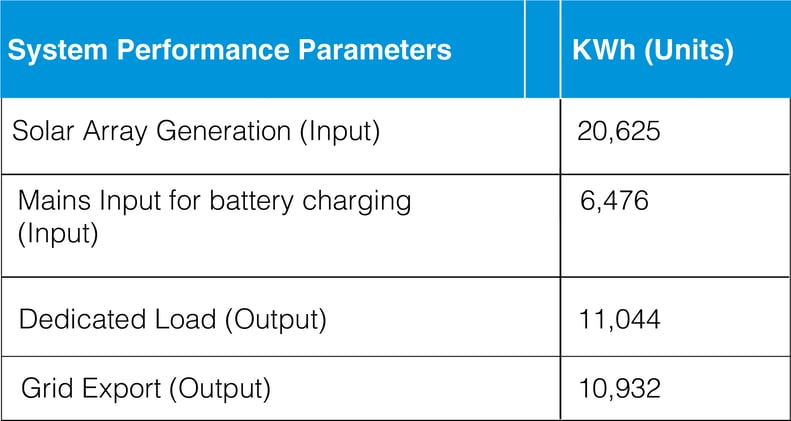 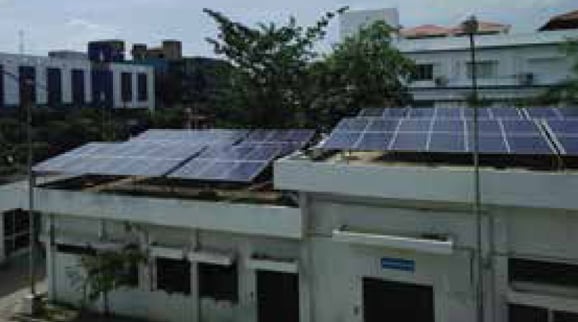 A 100KW Hybrid Rooftop Solar Power System (SPP) (Figure 6) using Hybrid Solar PCU (Figure 7) configured in Grid export mode is powering the library building of the Hyderabad Central University (Figure 6). Earlier the library had an average consumption of 290-300 units on weekdays. By enabling Export mode, the SPP was able to export 70-85 units to Grid, which was consumed by the other departments within the University. This way the Solar power extraction was increased by over 25% compared to operating in Off-grid mode during the weekdays (Table 2).

While the library load was low during weekend, the PCU was able export 190-215 units to Grid after keeping the 3000AH battery well charged for the night consumption and to cater the evening loads of Library building on weekdays. In weekends the Solar power extraction was increased by over 65% compared to the off-grid mode (Table 2). 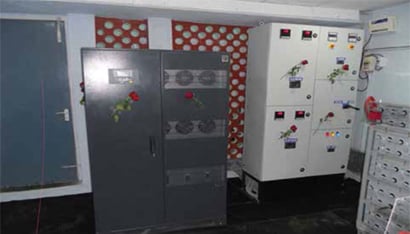 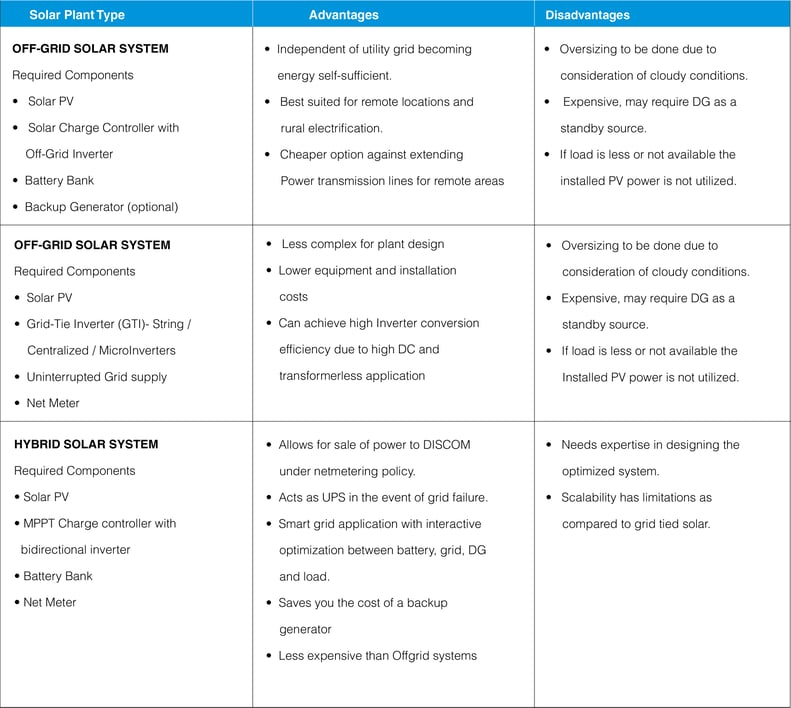 While considering a rooftop solar plant, the load pattern (daytime and evening peaks), grid availability, grid quality, feed in tariff (if any) have all to be considered for choosing the right system design. Where a grid is not available or very unreliable like in many thousands of Indian villages and other remote locations, the only viable choice is to design a solar power plant using an off-grid solar inverter. For locations where the grid is available, the design of the rooftop solar system must be such that capacitive consumption of solar power generated is maximized. Here the option is to go in for systems with a Grid-tied solar inverter or Hybrid solar inverter. Due to the lack of clarity on the future of Net Metering policies and also with the advent of smart metering and time-of-day tariffs, a rooftop solar designed using a Hybrid solar inverter ensures maximum self-consumption of solar power apart from providing a power back-up source during black-outs.

Rooftop SPP with a Hybrid solar inverter is the optimized, flexible and smart way to ensure availability of power and to create maximum value from the Rooftop solar investment made today. 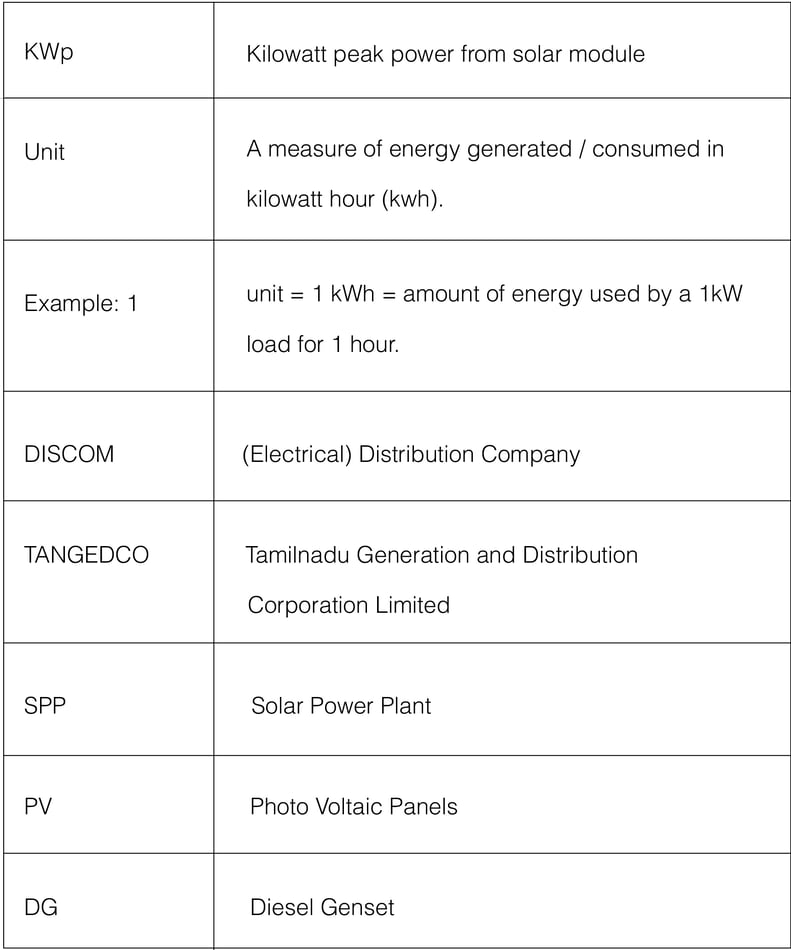