A double conversion UPS converts the incoming alternating current (AC) to a direct current (DC), so it can power the system’s battery, and then inverts the DC back to AC for powering equipment –hence the name “double conversion.” Take a look at how a UPS’s components work together so you can better understand your system and ensure your mission critical load remains online.

The UPS system acts as a source to the loads connected to it and as a load to the electrical mains.

As shown in the above figure, an online double conversion UPS has 4 major components

The rectifier acts as a load to the electrical mains. The primary objective of the rectifier is to

It also has a hidden objective which is to draw a sinusoidal current from the mains and also to ensure the current drawn is in phase with the voltage waveform so that the current harmonic distortion injected on the mains is less and the power factor is better. 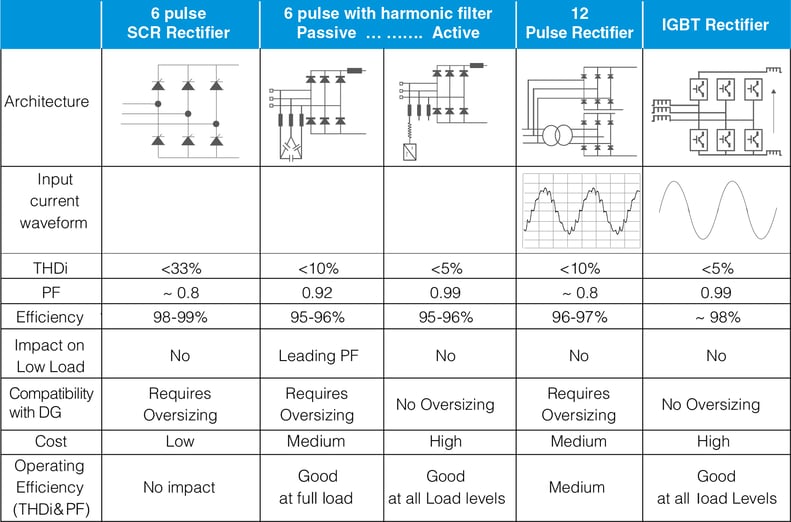 In general the best rectifier topology should have high efficiency, high power factor (PF) and low current distortion(THDi).This will ensure good compatibility with Genset and also reduce the need to oversize the DG set, incoming transformer and cable sizing for supporting the UPS.

The primary objective of the inverter is to convert DC power to AC power and to support the loads. The DC power can be either from the rectifier or from the battery connected to the DC bus of the UPS System.

The inverter is a critical component as this acts as a source to the critical loads connected to it. As a source, the inverter has to support the loads with sinusoidal voltage waveform under below conditions: 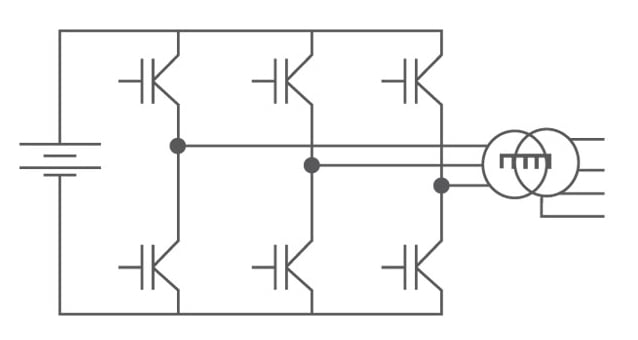 In transformer based inverter the primary objective of using a transformer is to setup the inverter output voltage as the DC bus voltage will be generally around 600V DC and the inductance required as a part of output LC filter will be incorporated in the same.

In a transformer less UPS, The DC bus voltage is increased to 800V DC and a DC-DC booster circuit will be introduced between the battery and the DC bus.

Refer section 5 for the details and selection of right topology based on the applications.

The two-level inverter has been widely used for a range of power levels. The schematic of the topology is shown in Figure 3 and 4.The two-level inverter switches between two voltage levels of +Vdc and –Vdc. The switching voltage will be the full DC bus voltage which is generally 600 to 800Vdc which demands the usage of IGBT with higher voltageing of 1200V to reduce the impact of voltage stress.

As a result of PWM switching at higher frequency, the output voltage waveform generated contains higher distortion and which increases the size of the choke / inductor must be increased to smoothen it into a sinusoidal waveform. 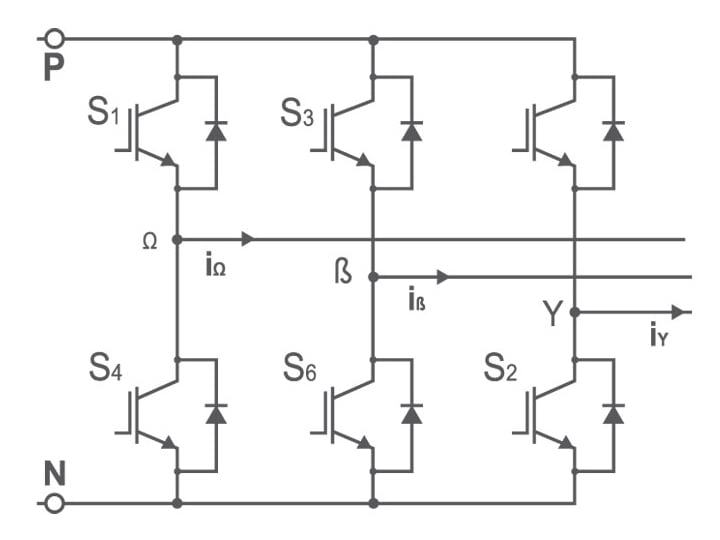 As a result of Three level switching, the resultant output waveform is more sinusoidal with lesser distortion, which will reduce the size 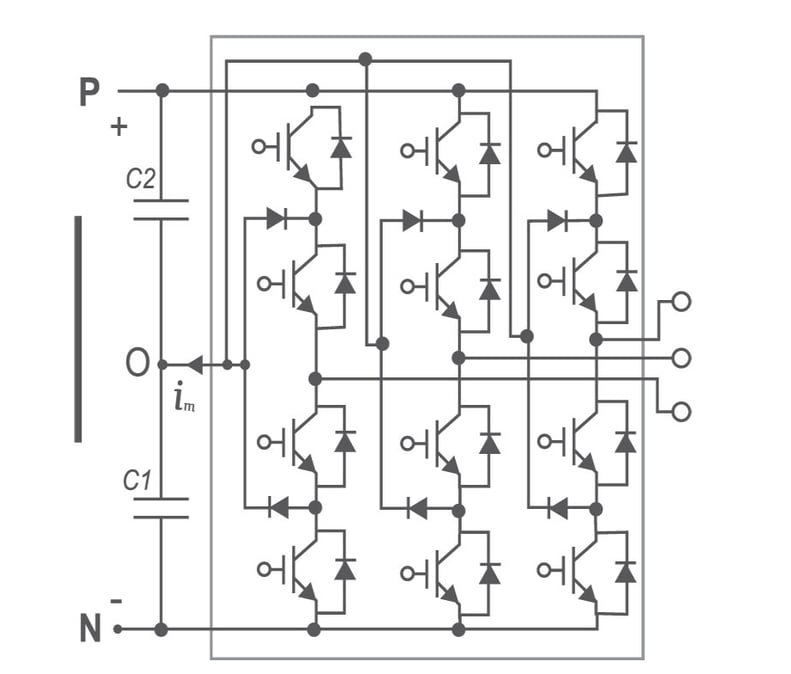 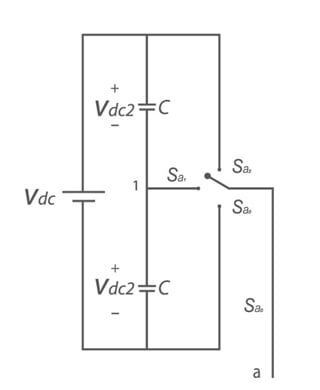 of choke/inductance required to smoothen the voltage waveform eventually reducing the losses across the chokes.

The switching losses of a three-level inverter is lesser but the conduction losses are higher compared to a two level inverter. 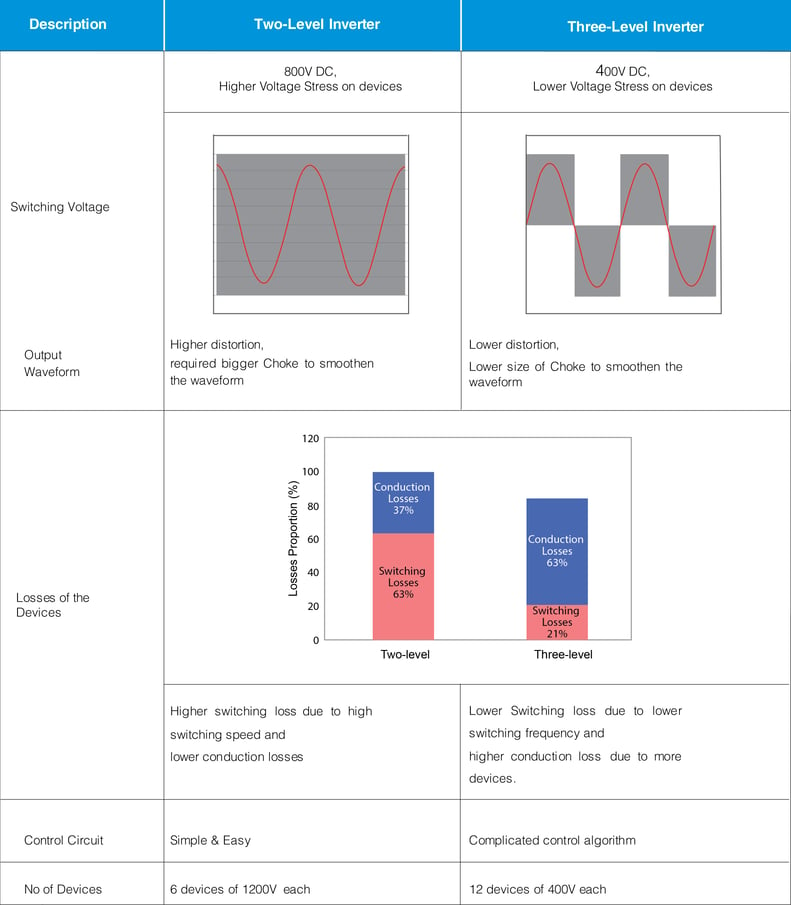 When electrical service is disrupted (i.e., mains failure), the UPS continues to support the load connected to it through its energy storage system. The UPS may provide power for durations ranging from 10 to 20 seconds to several hours. Shorter duration UPSs are designed to carry the load during the start-up of back-up electrical generators, typically diesel engine driven generators, and to enable a smooth transition to the generator as the power source.

In many cases, the UPS is designed to provide power for 5 to 30 minutes. The purpose is to enable an orderly shutdown of operations thereby avoiding an abrupt shutdown, which would otherwise cause equipment damage, product/work losses or a security/safety hazard. The under-desk UPS for PCs is an example.

UPS with enough energy to provide power for several hours are somewhat rare. A key reason is that, in most situations, it is less expensive to store energy in the form of diesel fuel (for generators) if backup power is needed for several hours.

The selection of right energy storage system depends on

Battery is the most critical component in the UPS and is also considered as heart of the UPS System. Without battery the UPS is just a power conditioner.

The purpose of the battery is to provide the energy necessary to supply the load when the mains supply in not available.

Cost of battery is a major component on the final price of the UPS solution proposed to the customer.

A battery is an electrochemical device that stores energy at one time for use at another. The battery uses electrical energy to store energy in chemical form which is converted to electrical energy during the discharge of the battery.

The UPS battery may furnish power to the inverter for a few seconds, many minutes, or hours. The battery capacity is determined by the amount and duration of power the inverter has to deliver to the load from the battery. 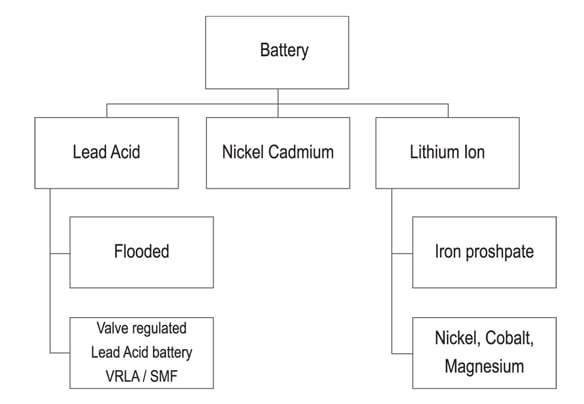 When the battery is connected to the load, the chemical changes take place in reverse direction, during which the absorbed energy is released as electrical energy and supplied to the load. Now we will try to understand the principle working of lead acid battery and for that we will first discuss about lead acid battery which is very commonly used as storage battery or secondary battery

The lead acid battery are further classified as

SMF (Sealed Maintenance Free): battery is a battery which doesn’t require topping up due to negligible water loss. It is designed in such a way that it cannot be opened or refilled. These batteries are safe, maintenance free and are suitable for most UPS applications. The SMF battery will have an additional safety valve which release the excessive formation of hydrogen, as a result of overcharging, in to the atmosphere.

SMF battery works on a recombination technology where the hydrogen gas evolved during the charging process is converted to water with the help of oxygen present inside the battery container.

The typical cyclic performance of the battery is less and is limited by the operating temperature and the charging profile. The SMF battery delivers higher power at higher temperatures but the life of battery comes down significantly

The SMF battery needs to be installed in a controlled environment to maintain the temperature at 25-27 deg C and an additional hydrogen sensor in the battery room is recommended for installation.

Tubular batteries: have openings at top to add distilled water for maintenance and safe running. These batteries are very rugged and used in Cyclic application. These batteries last longer due to robust design and are suitable for harsh environment applications.

The tubular battery can be installed in any environment(other than closed air conditioner room) with proper ventilation and air exchanges as hydrogen evolution from the battery is higher when compared with SMF buttery.

Tubular GEL batteries require no topping of water and is a sealed, valve regulated lead-acid deep cycle battery that uses a gel electrolyte. These type of batteries are rugged and suitable for cyclic applications but are maintenance free compared to flooded tubular batteries.

Nickel cadmium cell (NiCd): The active components of a rechargeable Ni- Cd battery in the charged state consist of nickel hydroxide (NiOOH) in the positive electrode and cadmium (Cd) in the negative electrode. For the electrolyte, usually caustic potash solution (potassium hydroxide) is used. Due to their low internal resistance and the very good current conducting properties, Ni-Cd cells can supply extremely high currents and can be recharged rapidly.

These cells can operate over a large temperature range, from +60°C down to -20°C. The selection of the separator (nylon or polypropylene) and the electrolyte (KOH, LiOH, NaOH) is also of great importance. These constituents influence the voltage conditions in the case of a high current discharge, the service life and the overcharging capability of the cell. In the case of misuse, a very high-pressure may arise quickly.

For this reason, these cells are equipped with a reversible safety valve, which can act several times. NiCad cells offer a long service life (depending on the type of application and charging unit up to 2000 cycles).

When the cell charges and discharges, ions shuttle between cathode (positive electrode) and anode (negative electrode). On discharge, the anode undergoes oxidation, or loss of electrons, and the cathode sees a reduction, or a gain of electrons. Charge reverses the movement.

All materials in a battery possess a theoretical specific energy, and the key to high capacity and superior power delivery lies primarily in the cathode. For the last 10 years or so, the cathode has characterized the Li-ion battery.

A typical system consists of

SuperCaps (also known as ultracapacitors or electric double-layer capacitors) provide an alternative source of DC power to traditional rechargeable batteries. Supercapacitors are high density energy storage devices with a capacitance (energy density) of up to 10,000 times that of conventional electrolytic capacitors.