Availability means the amount of time a device is actually operating as the percentage of total time it should be operating. High-availability systems may report availability in terms of 9 minutes or hours of downtime per year. Special features allow the system to stay operational even when faults do occur.

A high availability system would disable the malfunctioning portion and continue operating at a reduced capacity.

Availability is typically given as a percentage of the time, a system is expected to be available, e.g., 99.999 percent (“five nines”) and is expressed as

• Reliability- The individual UPS and other power distribution systems must be reliable, as measured by field-documented MTBF (Mean Time between Failures).
• Maintainability- The system design must permit concurrent maintenance of all power system
components supporting the load with part of the UPS system while other parts are being serviced
• Fault Tolerance- The system must have fault resiliency to cope with a failure of any power system component without affecting the operation of the critical load equipment.

Reliability can be defined as the probability that a system will produce correct outputs up to some given time(t). Serviceability or maintainability is the simplicity and speed with which a system can be repaired or maintained; if the time to repair a failed system increases, then availability will decrease. Serviceability includes various methods of easily diagnosing the system when problems arise. Early detection of faults can decrease or avoid system downtime. The traditional focus has been on making the correct repairs with a little disruption to normalize the operation as possible. In principle with a high MTBF or low MTTR, the availability of the system can be improved.

For calculating the availability, we need to know its MTBF and MTTR.

The two components A and B are considered to be operating in series if failure of either of the parts results in failure of the system. 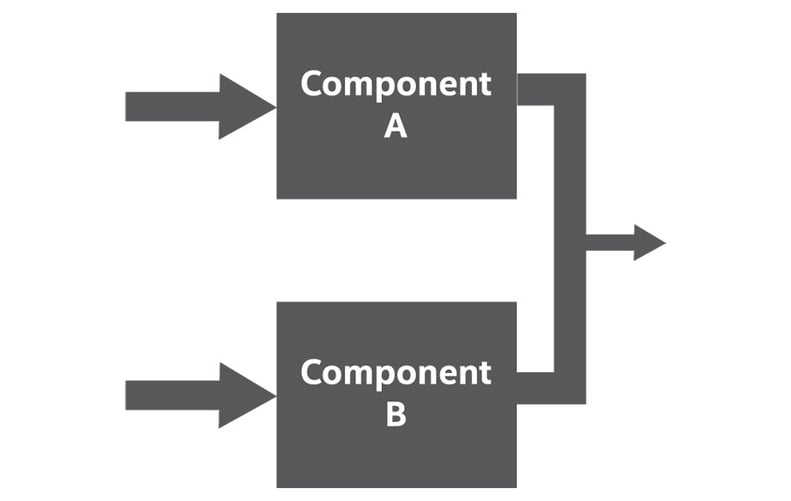 Comparison of component’s in series or parallel

The table below shows the availability and downtime for individual components configured in both series and parallel configuration.