There are a number of electrical devices that have nonlinear operating characteristics i.e even when applied voltage is sinusoidal in nature, the current drawn by the device is non-sinusoidal in nature. These nonlinear devices used in power distribution circuits create nonlinear currents and which subsequently causes voltage distortions. These nonlinear currents and voltages have been generally referred to as harmonic currents and voltages. The proliferation of electronic switching devices in modern equipment has resulted in a significant increase in the amount of harmonic pollution in the electrical distribution systems. These harmonics if disregarded or undetected may cause harmonic resonant conditions, which could present system operating problems resulting in complaints from customers and reduced life of power equipment as well as degraded efficiency and performance. Harmonic currents and voltages can cause many unfavourable effects on the power system itself and the connected loads. Malfunctioning of electronic equipment, capacitor failure, transformer and neutral conductor overheating, excessive heating in rotating machinery are some of these effects.

The harmonic content varies from one installation to the other. This is based on the type of loads as well as the location of the loads in the power distribution system. A proper power quality audit of the site has to be conducted to understand the harmonic distortion levels in terms of current and voltage. The typical audit will document the following parameters to help propose the right solution to reduce the harmonics. Figure 2 Harmonics Limits as per IEEE 519

The above figure 2 shows the harmonic current limits as specified by IEEE 519.

The intent of IEEE to specify this limits is to:

The harmonic limits are specified based on

a. PCC – Point of common coupling

Point of Common Coupling (PCC) with the consumer/utility interface is the closest point on the utility side of the customer’s service where another utility customer is or could be supplied. 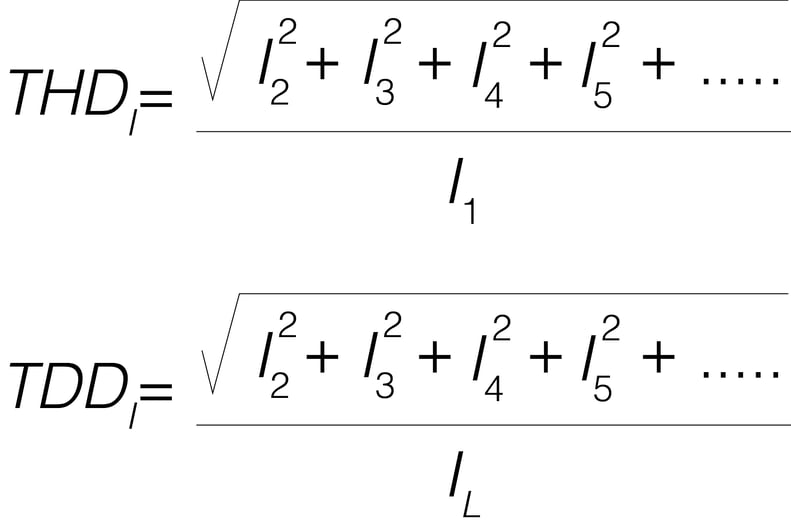 The Active Harmonic Filter is the proven solution to supply the harmonic currents required by the nonlinear loads and has been proven to be effective for applications across industries to help customers meet the IEEE and CEA guidelines. The Active Harmonic Filter is connected in parallel (shunt) with each of three phase conductors of a 3-phase, 3-phase, 4-wire electrical power system. 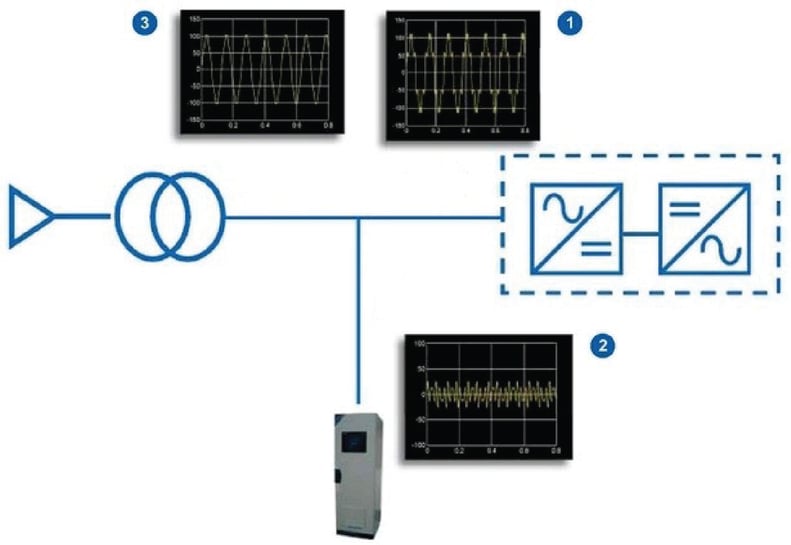 The active filter shall be suitable for connection at an electrical distribution panel, transformer secondary or at an individual load. The AHF will be installed in parallel to the harmonic generating loads. CT connected to the distribution system has to measure the current being drawn by the load and should feed a compensation current into system based on the actual current for amplitude & harmonic order, whose amplitude and individual harmonic order is exactly equal to the current drawn by the load, but which is 180 degree out of phase with it. So the harmonic currents are cancelled.

The apparent power (Kilovolt Amperes or KVA) used in an electrical system by an industrial or commercial facility has two components:

The relationship between kVA, kW and KVAr maybe is represented by triangle as follows 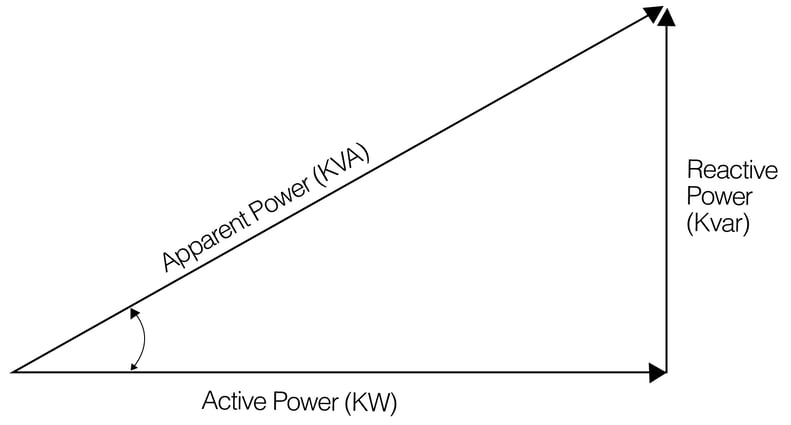 The best way to improve the power factor is to reduce the KVAr consumption by injecting the required KVAr locally at the PCC. In case of harmonic rich installations, the power factor is based on the displacement and distortion factor as explained in section 2.c. 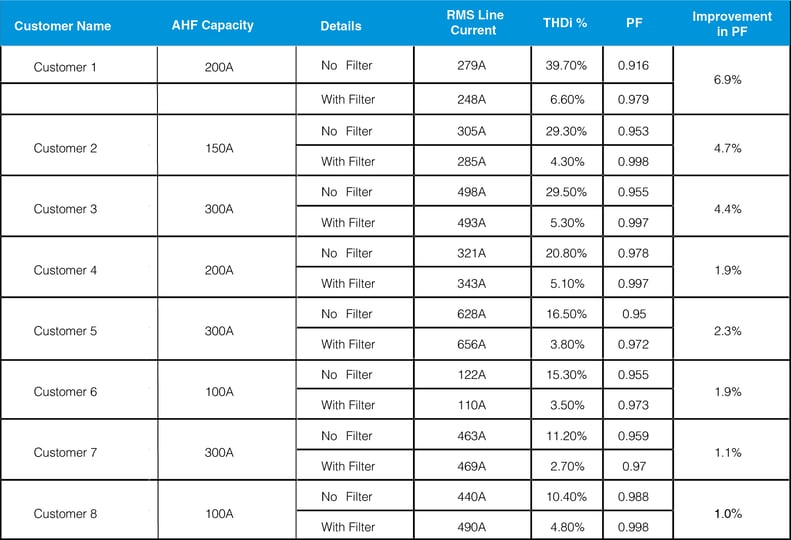 The customer is a major food processing unit based out of Coimbatore (a city in southern part of Tamil Nadu) who produces tasty and healthy dairy products and other food range of ‘Ready to cook’ Instant Mixes’.

Thee customer wanted to reduce the THDi to less than 8% and we proposed the customer to install anactive
harmonic filter of 200A at the PCC. 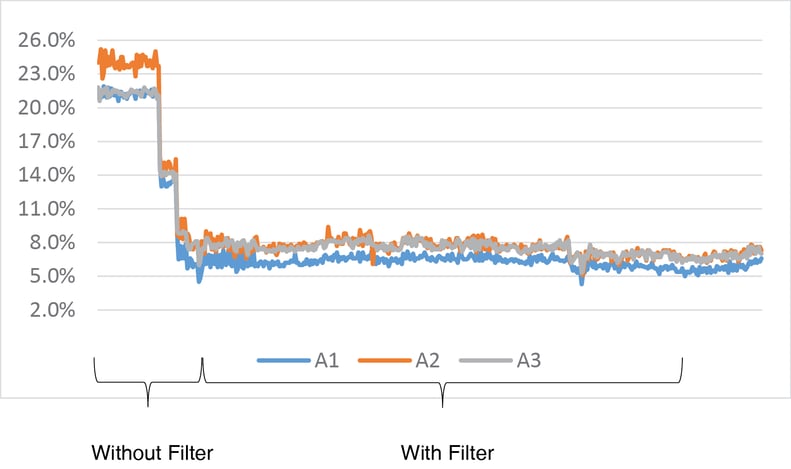 The customer is an Indian multinational provider of Information Technology (IT), networking technology solutions and Business Process Outsourcing (BPO) to the telecommunications industry. 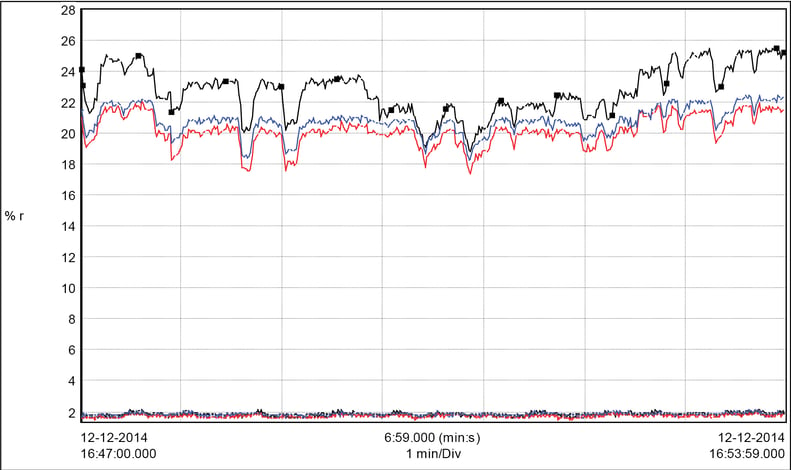 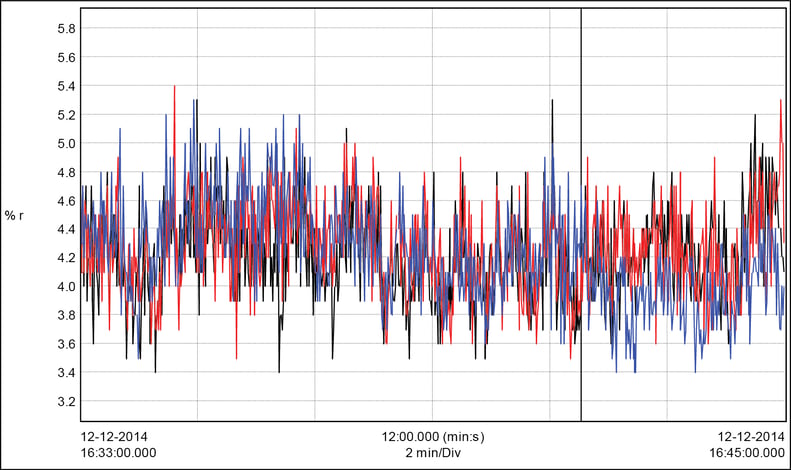 The customer is one of the leading suppliers of premium quality yarn supplier in South India. The manufacturing plant is located at Tamil Nadu, South India. The company is incorporated in 1992 with a well laid out building with latest machineries and modernizing periodically to meet the market requirements.

The Mill is equipped with the following Machineries 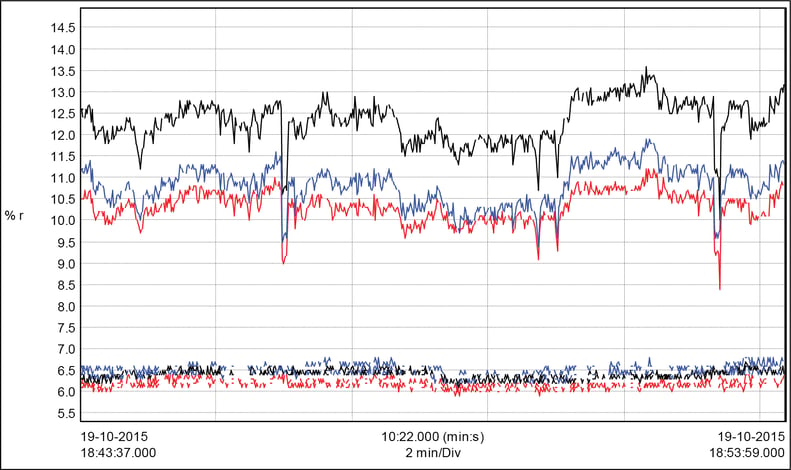 By installing Active Harmonic Filter, the customer has benefited by: