The UPS system has become a vital component in managing the critical power infrastructure
and to guarantee the availability of power for the critical loads. Now the key question is what topology of UPS has to be used.

Concurrent Maintenance: It is possible to shutdown one complete source as the distribution system is through separate independent paths/sources and to perform the maintenance activity without disturbing the loads.

Figure 2 Schematic of UPS with external Transformer (at Input)

When a transformer is connected to the bypass of the UPS, the coordination of the downstream safety systems is disturbed and has to be co-ordinated based on the short circuit current capacity of the transformer.

In the event of an short circuit at the output of an UPS(without bypass),the output voltage of the UPS becomes almost Zero and the output current will start to raise until it reaches the current limit setting of the inverter bridge and will last for 5-6 cycles after which the inverter will trip (Figure 5).

The fault clearing is possible if the selected UPS system is able to deliver a higher short circuit current and the breakers are co-ordinated such that the breaker feeding the short circuit is first cleared before any of the upstream breakers in the output distribution of the UPS.

b. In transformerless UPS

The short-circuit characteristic is purely based on the electronic current limiting circuits of the UPS. The amplitude and the duration of the short circuit current is purely based on the characteristic of the devices selected. To have the same characteristic of transformer based UPS, higher rating of IGBT has to be selected. In some Transformer less UPS, the UPS may also transfer to bypass to clear the fault thereby putting the connected loads at risk without any power protection

Galvanic isolation of DC (Battery) from the ac output

In the event of short circuit in any one of the IGBT’s in the inverter bridge, the DC will flow through to the loads and will disturb the smooth operation of the loads.

In a transformer-based UPS (as shown in Figure 1), the transformer which is at the output of the inverter provides a galvanic isolation between the DC bus and the output AC power. This transformer will
not allow the DC to flow through the loads.

In a transformerless UPS, there are additional electronic circuits to detect the DC component in the output but will require an output transformer as shown in figure 4 if a galvanic isolation is desired.

In a transformer-based UPS, the output neutral generated by the transformer can be grounded to earth so that the UPS can act as a separately derived source. However to achieve this, the bypass has to be disabled.

In a transformerless UPS, If the UPS has to act as a separately derived source, a common transformer has to be connected to the input of both rectifier and bypass mains (Figure 8). This will decrease the overall efficiency of the UPS by atleast 2-3%. 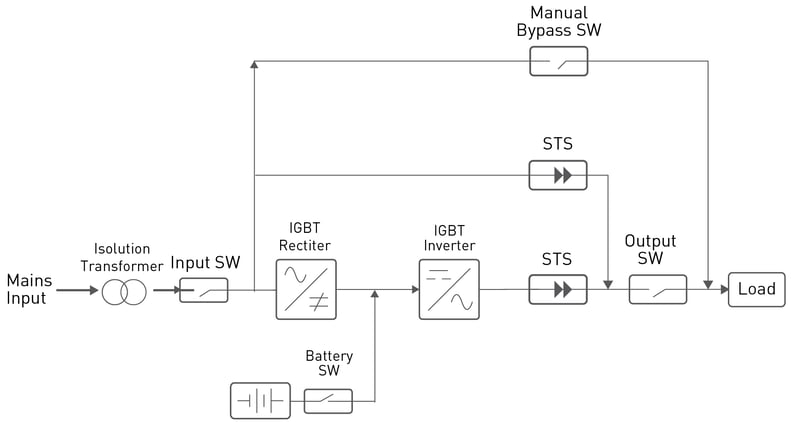 Efficiency is a function of the technology and choice of components used in the UPS. Also the efficiency of the UPS specified by the manufacturer is usually under a conditioned environment with linear loads. Actual site requirements maybe different and this should be factored when comparing the energy efficiency of UPS from different manufacturers.

Also the efficiency of the UPS under different loading levels from 25 – 50% is more important than the energy efficiency at 100% loading.

A summary of efficiency comparison is tabulated below 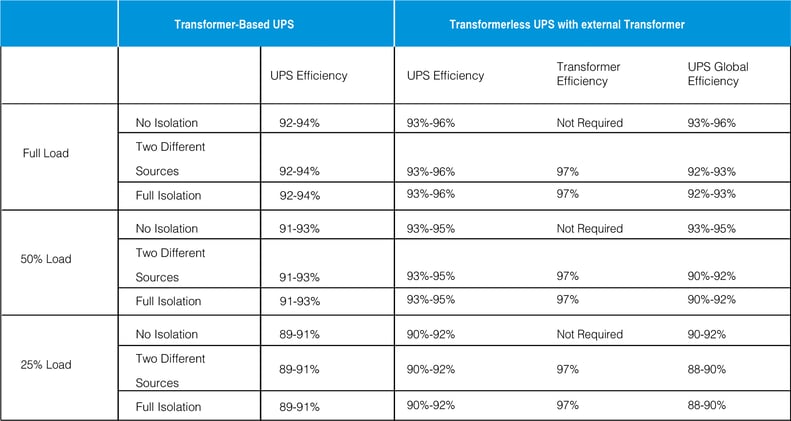 A summary of both topologies of UPS is tabulated a below 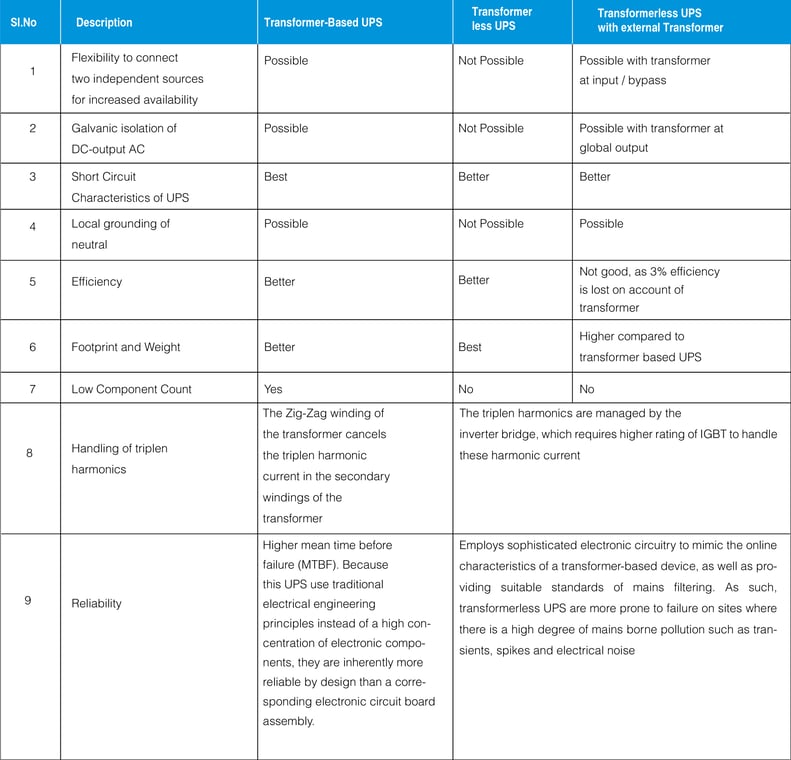 • Gives better reliability for fully inductive and half controlled thyristor based loads which draws unequal current in both the halves of sine wave with 3ph 4 wire inputs
• The loads such as motors, fans, isolation transformers in the customer facility are protected even if there is a failure of the inverter IGBT as there will no flow of DC voltage to the motors which could have damaged the motors.

UPS which are transformer free are suitable for IT applications where there are downstream PDUs with isolation
transformer.